It's Starting to Get So Bad You Can't Sleep

It's a bit over one week away. On July 18, 2009 at 12:40pm Central time, the Beneteau First 36.7 Section will cross the start line for the 101st Running of the Race to Mackinac. For a fleet that has been in existence since 2002 in Lake Michigan, the twenty boat section for the 2009 Mac Race will once again be competing for the Mackinac Cup. While many other brands have tried to lay claim to being easy to sail or one of the fastest growing on Lake Michigan, they pale in comparison the First 36.7 Fleet.
Having grown from just an eight boat fleet it's first year of launch, The 36.7's have have maintained a consistent growth rate over the past eight seasons. Even this year, amidst all the economic challenges in the country, they have added to the fleet where other fleets have lost members or been flat in growth. I'd like to think that it is due in part to the camradrie in the fleet, the competition and the value the design brings in comparison to other brands. Truth be told, there will be 22 -36.7's in the race this year. Twenty boats will be competing in the One-Design Section and two boats will compete in the double-handed division. A testment to the flexibility of the design and the skill of the owners and crew that sail them.
Usually, the butterflies don't start until about Thursday of race week. The burning feeling in the pit of my stomach that keeps me up at night. Add to that a seemingly long list of things to do for the boat prep, the business, MAC race committee and it usually makes for an interesting (albeit somewhat stressful) week. I'm finally able to breathe a huge sigh of relief (as are most of our crew) after we take our traditional team photo on the dock, bid our family and loved ones farewell and cast away from the slip. It's race time- finally.
Don't know why, but this year- the burn is here a week early. Perhaps it's the goofy and wet spring we have had so far. It has been hard to get any continuity going for the race program. Busy schedules and just plain life has been at work on us. To say the pains of the world have added to it, might be the understatement of the year. Even more so, I strongly believe that it's because of the huge target that I feel our team has on it's back. With back to back section wins in the 2004, 2005 and 2006 races as well as a section win in 2008 and 3rd overall for the Trophy division- we know everyone is gunning for us.
My thoughts as of late have gone to a book a read a while ago. It's a campy sports cliche named- Playing for Keeps: Michael Jordan and the World He Made . It was given to me by a mentor in the corporate world. It's a quick read book that gives you a glimpse behind the mind of one of the greatest athletes of our time- the feelings he had during his failures, the drive that they instilled in him the drive to excel and to be one of the best at what he did. It reminds me alot of our sailing team. OK-We may not be Jordanesque in our accomplishments in all races- but when it comes to the mid-summer MAC- we've redefined continuity for the race in the section. This feature in itself- makes us the one everyone wants to beat. After our catostrophic finish in the 2007 MAC when we blew a one-hour lead on the fleet as we ran aground on South Graham's Shoal, I went back to this book and reread parts of it. In part to reconnect and make sense of the feeling of dissapointment of having to withdraw from the race after requiring assistance to leave the shoal. It was a feeling our team will never forget. Then the elation of coming back in the '100th Running' the next year in what has been our best finish to date in the overall dvision. This year, the pressure seems to be greater. The fact that the competition has been elevated even more in the fleet- makes the 'burn arrive' one week earlier and sting all the greater.
I find myself going to "Playing for keeps" to relieve the burn of anxiety and find solace in the last few days before the race. Who knows how this one will turn out. We have our plan- but inevitably so will all the other 350+ teams. We'll race our race- put out 150% for 48 hours and say a prayer.
Our Lady of Blessed acceleration- pray for us!
Posted by Lou Sandoval at 4:24 PM 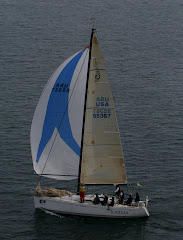